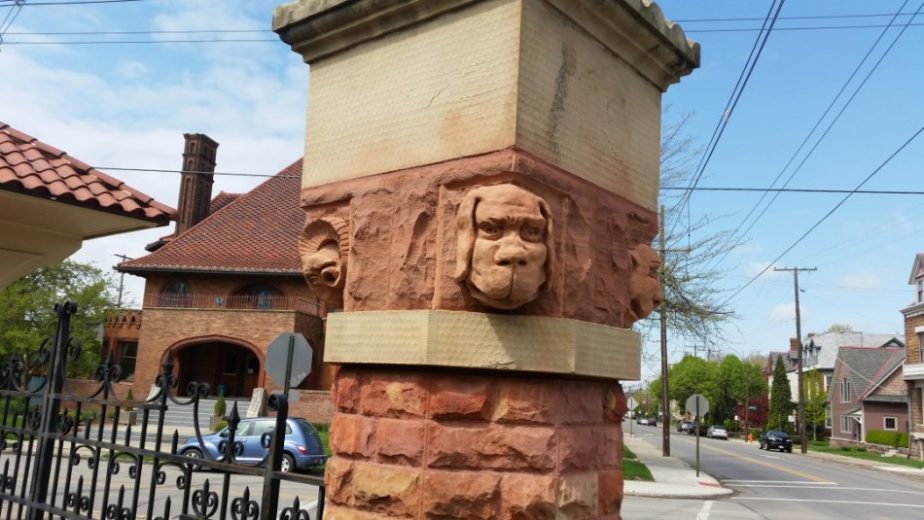 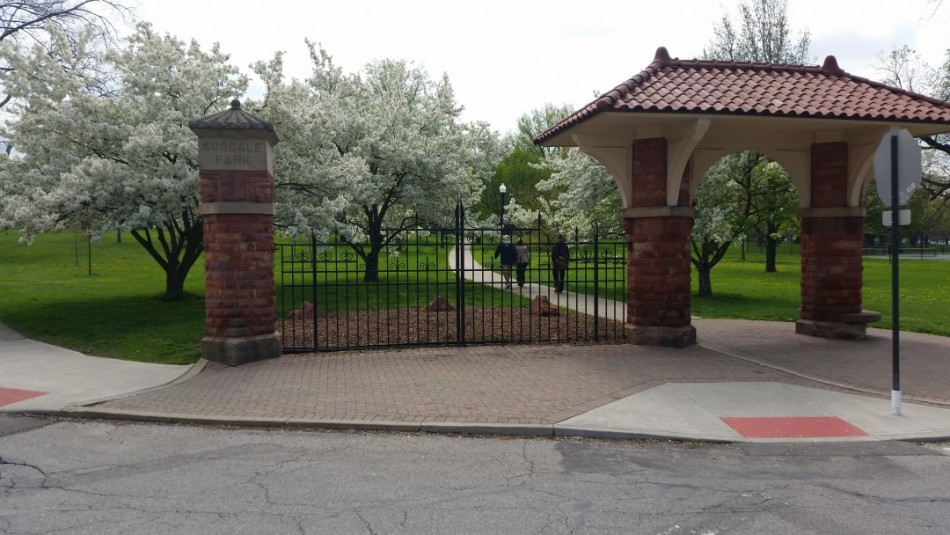 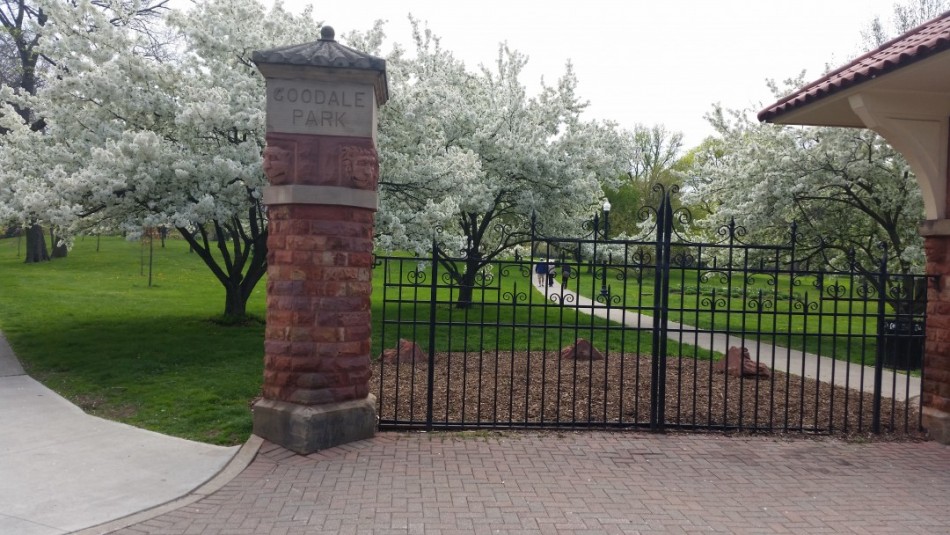 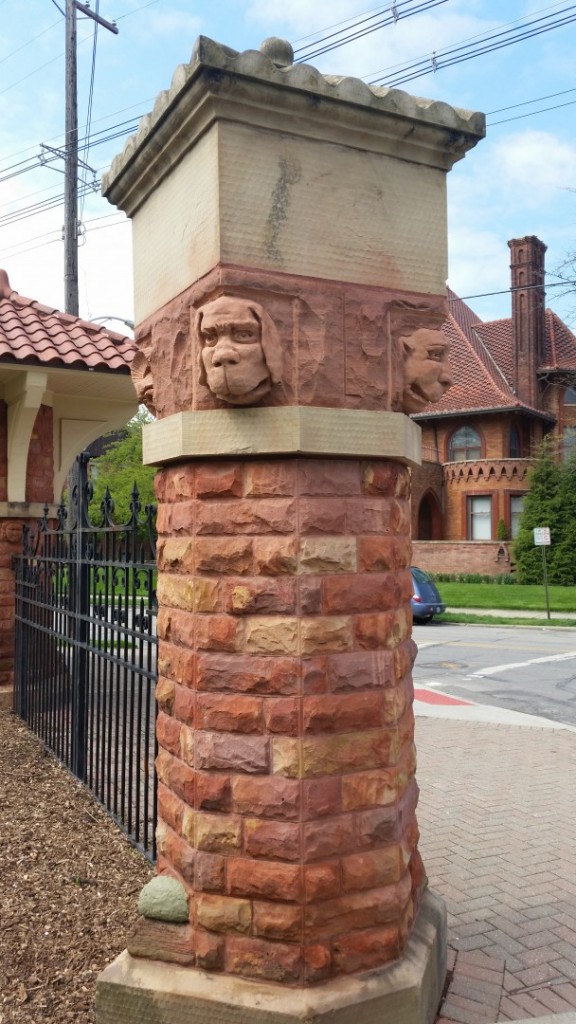 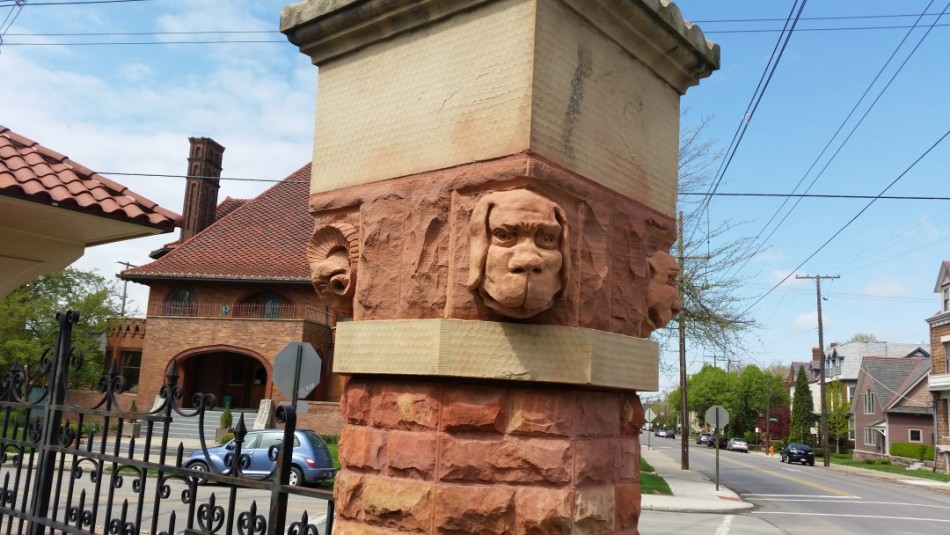 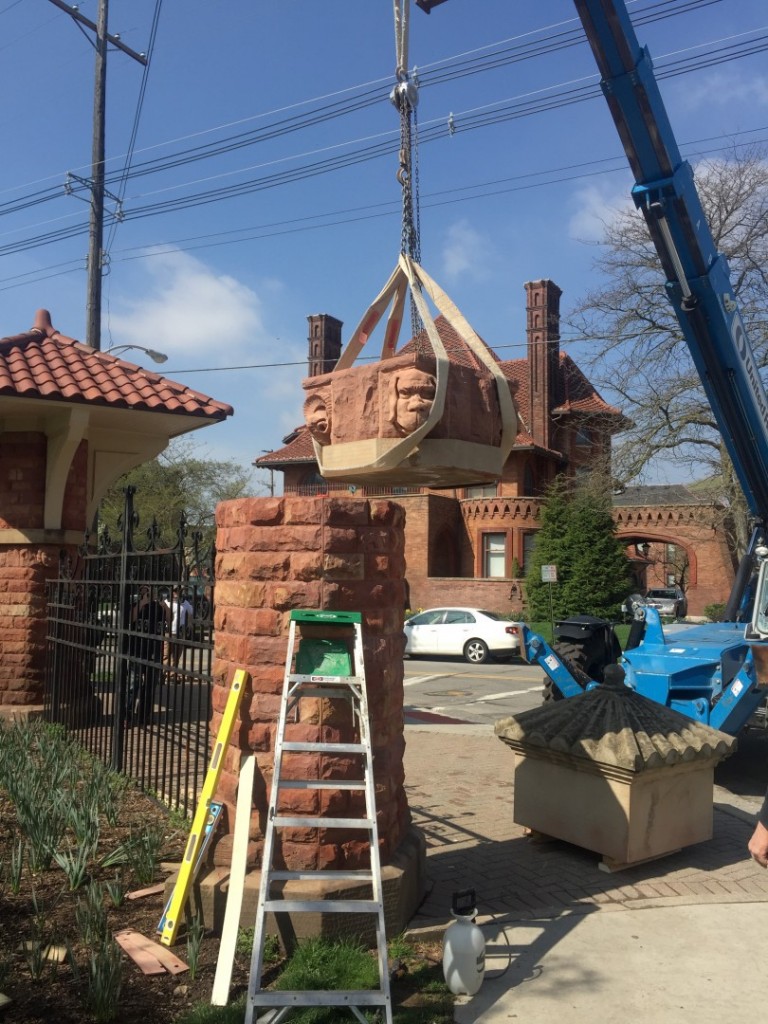 This column in Goodale Park in Columbus, Ohio, originally installed in 1899, has deteriorated badly. I have been commissioned by a Centennial Preservation Group to re-carve the heads. My proposal is to rebuild the missing parts with clay and then to re-carve new sandstone blocks to match the clay.

The gate and column were a gift in 1899 to the City’s first park. The original meanings of the column animals have been lost to time, although we do know that the eight human heads on the gate represent the eight stages of Man. The carving is masterful, and does not resemble any other carving in the Columbus area, that I know of. We know nothing of the original artist.

The tooling on the buff sandstone has survived remarkably well, and demonstrates the level of the craftsmanship brought to this column. The heads are about 9′ off the ground- too high to touch. The wear is likely from acid rain and the burning of coal for so many decades.

The cap came off easily, and we set it aside. After we had picked the section with the heads and put it on my truck, we put the cap back for safekeeping while the restoration is done in my studio.

Playing with big lifts and heavy things is always exciting. Although no one can really see it, the scalloped top is textured with one continuous spiral line from top to bottom.

This is the only original photo the historical committee could give me. Detail must be inferred. It is agreed the animal on the left is probably a panther, and that the one on the right is a lion. The ram, not show here, is extent enough to know it is a ram, but the fourth head was badly deteriorated and no known photo exists.

The ears, the eyes, a bit of the for head, and a grainy photo are all there is to go on, but that’s enough to conclude it was a stylized panther.

Part of an eye, droopy ears, and a bit of forehead seem to indicate the subject was a dog. No known photographs exist. 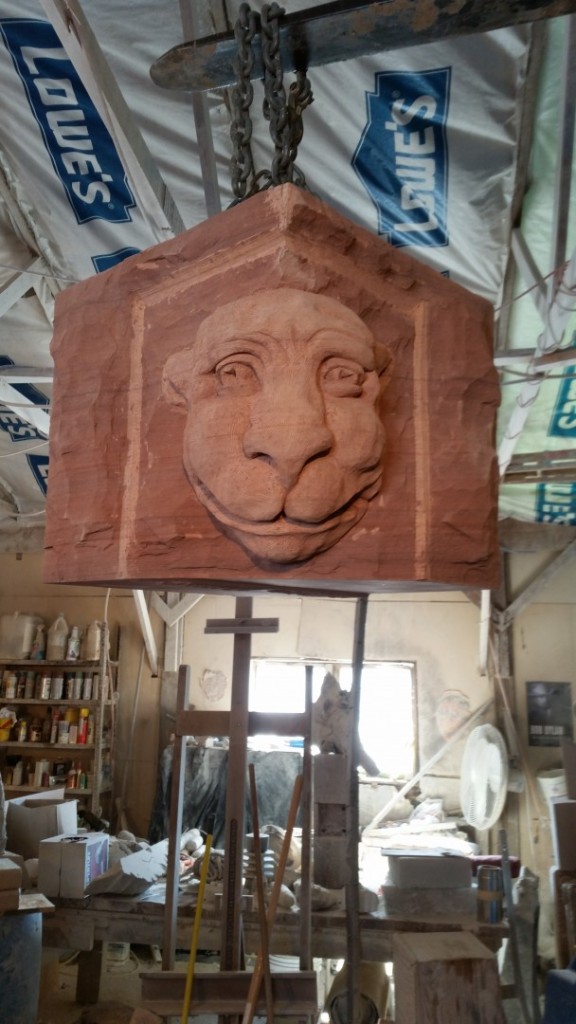 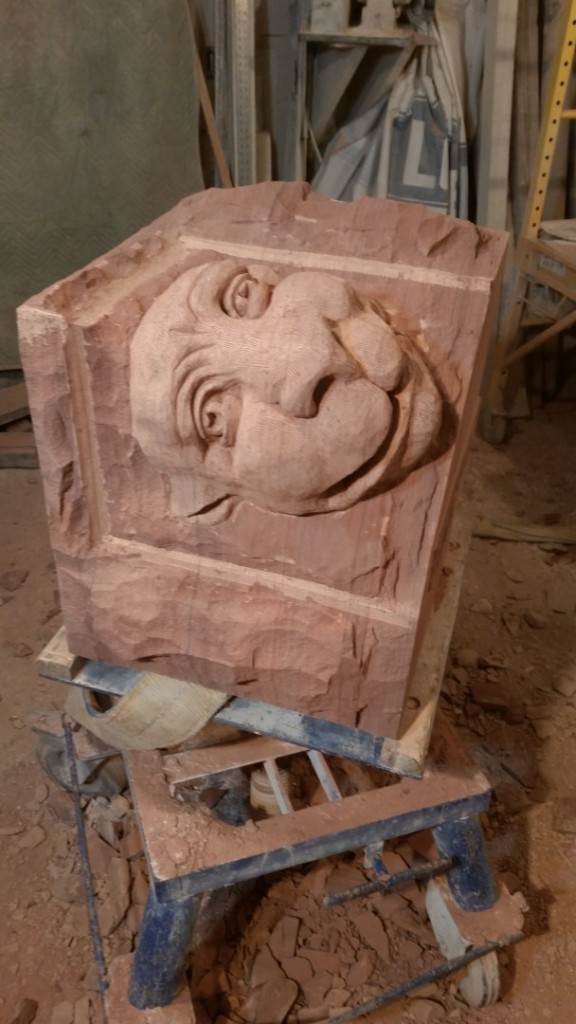 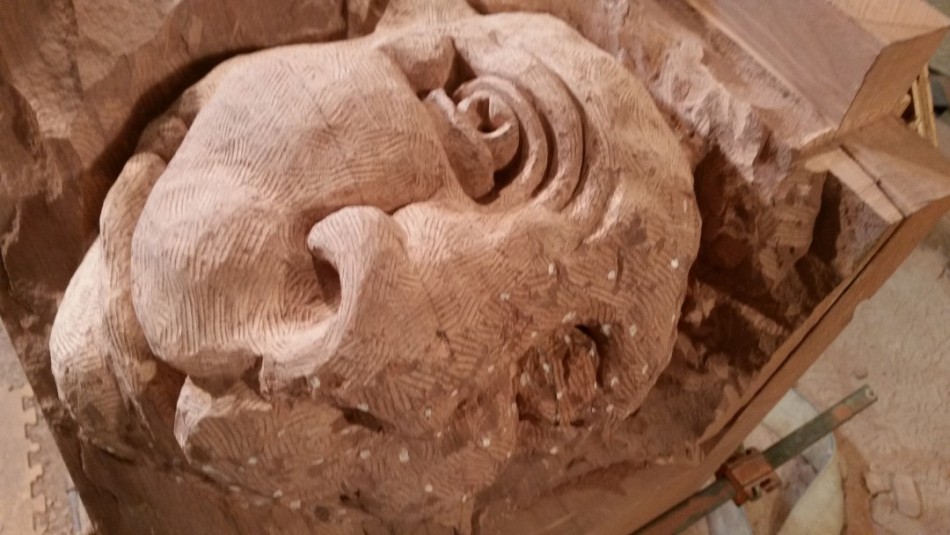 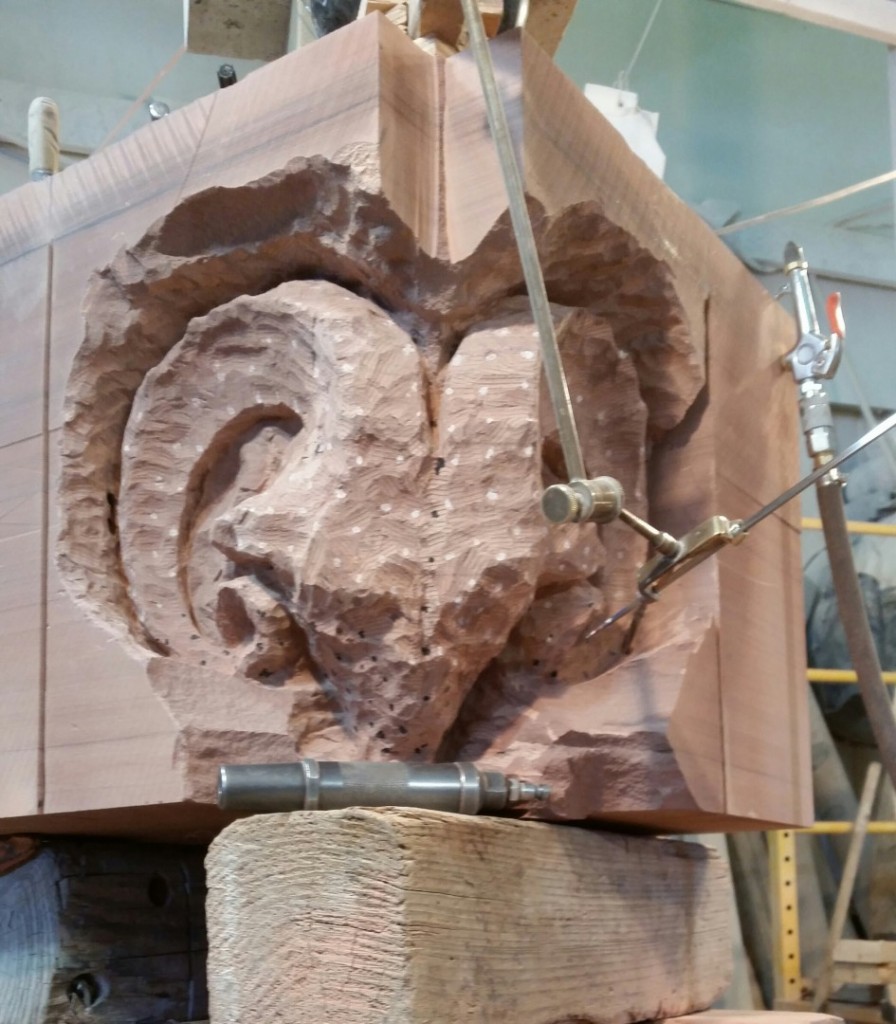 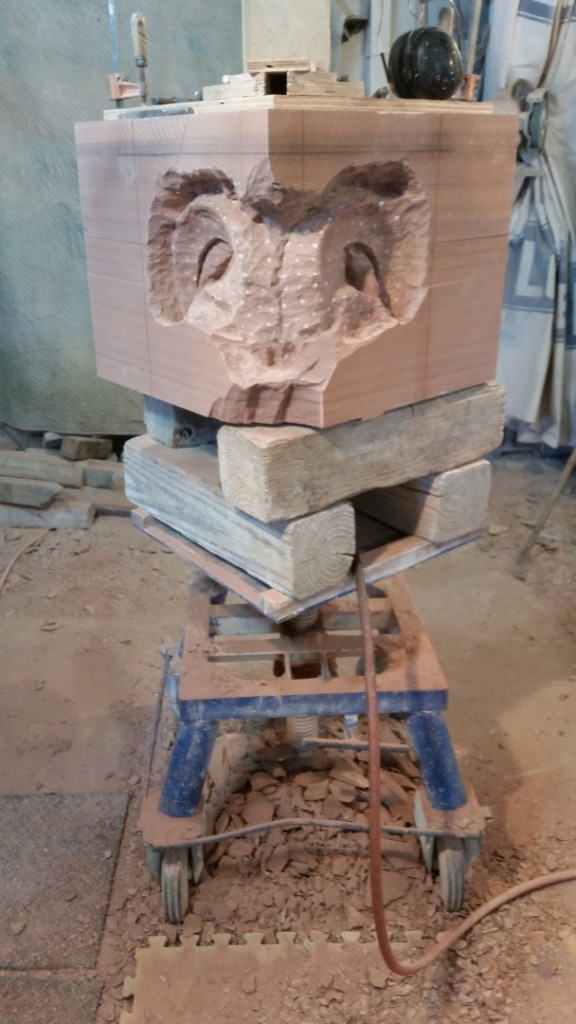 The ram is pretty much intact, and a hint at the style that may have been used for the other heads, although it does seem very different.

The lion head featured a bit of an ear, some mane, and pits indicating the height of the eyes. The source photo and the extent remains indicate this was a lion. Here I have started on the lion, and on the left is an early version of the panther.

Using an oil-based clay that gets softer with heat (I use an old Sunbeam electric skillet), I rebuilt the heads in full scale in my shop. This is an early stage of the panther. The lion is on the right, the dog on the left. The sandstone blocks are 16 1/2″ tall.

I was able to get a good start by making the right begin to mirror the left. At this stage I had to commit to something, and felt that the only defensible choice was a dog.

The red sandstone is the original carver’s work. I have tried throughout to do what I could to work in his style more than my own. I’ve learned during this process several pointers from the past. 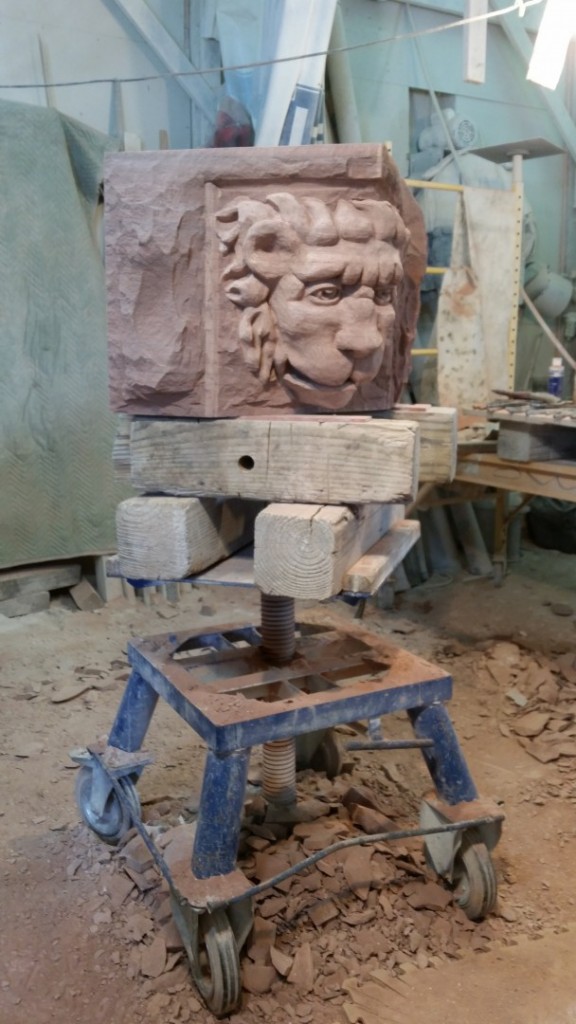 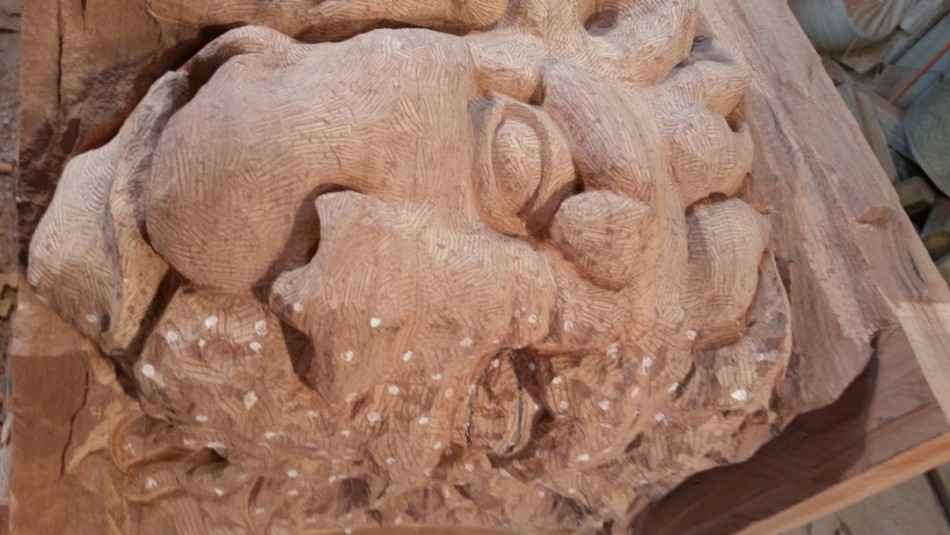 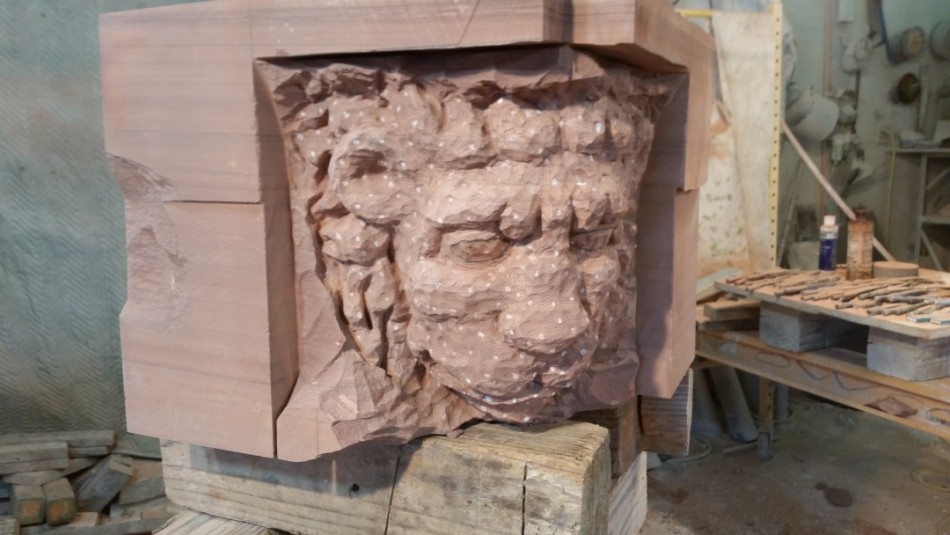 The lion, nearly complete. I will add textural details in the sandstone when I recarve them. 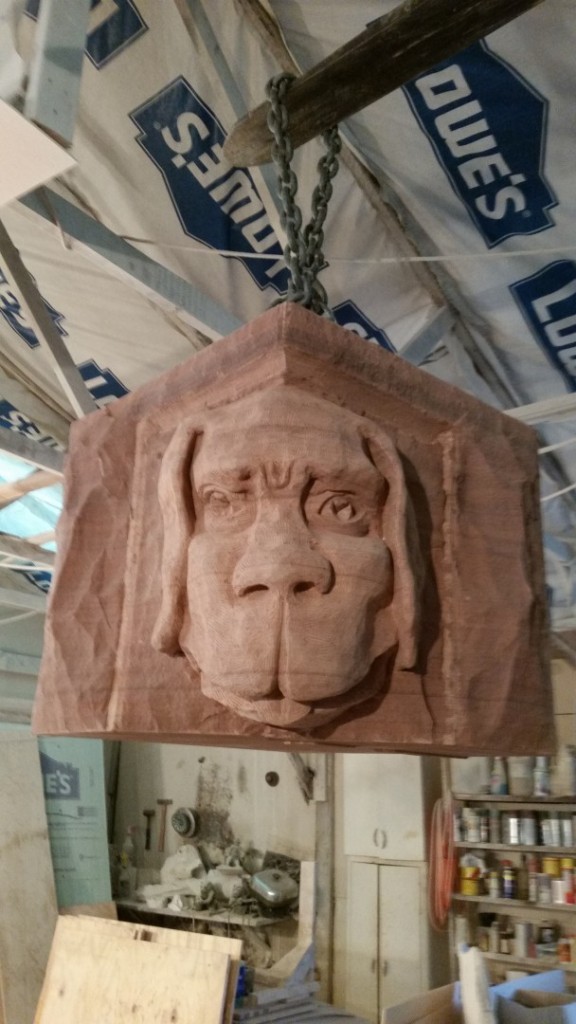 The dog is as animated as I could get him, given the restraints.

I gave the panther a sneer, as the eyes sort of implied that, as did the source photo. He struck me as a tease, a mischief maker.