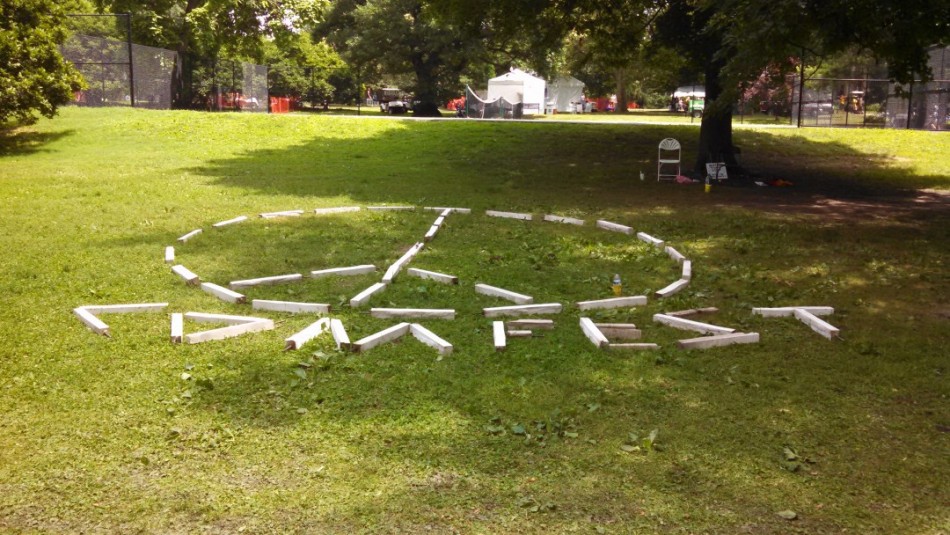 Comfest is a big deal in Columbus, Ohio. Each summer volunteers put on three days of music, activist opportunities, and fun. Last year the organizers decided to add sculpture and asked me to participate. I had these pieces left over from roughing out an earlier piece, and drilled them and glued in steel pins on one end. They were easy to plunge into the soft ground to build ever changing sculptures, some made by me alone, others with the help of the festival goers.

For three days I made a constantly evolving piece, with the help of the community. It was a lot of fun, and there were some interesting conversations and interactions. Doing Art in public is a riot.

The square gave way to the circle., one piece at a time. Each post weighs about thirty pounds. At the end of each day I was definitely feeling it.

This piece was done by gently tossing the posts through the air and letting them land as they may. I wish I had taken a video of this one. Several of us plucking the posts from the circle and tossing them around. Good times. Would have made great video.

This version is so relaxed it almost looks drunken.

After I had completed this one, a man approached and performed an amazing feat- he leaped them al, on after the other, without stopping and without blowing a single landing.

It was hilarious to watch the would-be ninjas try to balance on these structures, clearly a bit buzzed… not.

My friend Ashley came by (wonderful painter) and asked if I would do him as a chalk outline. He got way more than he asked for. No bumping the sculpture allowed!

And then he managed to crawl out without disturbing a single stone. Go Ashley!

Now ask yourself- how did he get out of there? Not for the faint of heart. He was VERY slow about it, I must say.

That is all balance, and in a very public and crowded space. Majestic, it was. And all by eye. No measuring tools were used throughout the festival.

This one occupied the most space and took the longest time to make. Very tricky- and very cool.

This subtle piece was done by a volunteer. I dig it.

Peace, Art, and good times on a summer day. Wonderful.

Ihad a great time. Thanks Comfest. What for next year, eh?